Getting to Know the TERP® System 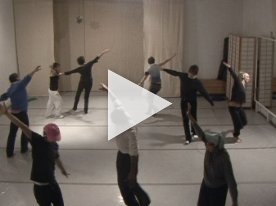 The TERP® system is a wireless, multichannel digital broadcast system of custom-built hardware and software for composing, directing, and driving human movement without rehearsal.

The History of Terp

Several years ago Patrice M. Regnier embarked on a project which was designed to dramatically aid in the rehearsal process. The problem was clear. The main – and the most time-consuming difficulty – was not in having a trained dancer learn individual movements but was in the context or phrasing of those movements.

Patrice M. Regnier, as inventor of the TERP® system, has the long-term vision for the company and the most in-depth understanding of the system and it’s possibilities. She has years of fundraising experience and leadership expertise from heading her dance company for over 20 years. Human movement is her quest. Inspired by early discussions with Jerry Weisner and Marvin Minsky about the future of technology sans creativity, she began to think about how to integrate the two. From the development of Stochastique Choreography, a system she invented using a software program to create a morphing effect in live choreography, to the founding of ARTeam, a collaboration of art and technology experts, she has kept this quest alive. Her work with bodies and technology includes the first ballet that integrated 3-D human movement computer animation (not motion capture) with live performance. This ballet, RAB, toured in several countries, including US, Europe, Asia, and Canada, perhaps most notably to Chicago for SIGGRAPH in the Arie Crown Theater. She has acted as a creative consult for several companies including Interval Research Corporation, a company founded by Paul Allen, co-founder of Microsoft. Patrice is an artist, but also an innovator and leader in both the field of dance and movement technology.